So far the trip has been good.  The plane trip was a fun but boring at times.  There were many things to do such as watch movies, play games and listen to songs.  So far the highlight of the trip was going to the War Memorial.  The best part of the War Memorial was the Discovery Zone, where you could go in an old helicopter.  That was really cool because it shook a little.  It was also cool going in the pretend trenches.
Miss you Mum and Dad, Tom. 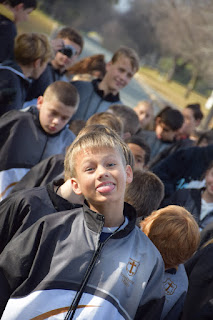 To Mum, Dad and Keegan,
We We went to the War Memorial for a little while today.  While we were there we looked at soldiers, submarines, planes and boats.  All of them were very cool. I miss you guys a lot and I love you all. Kade.

The day started with an awakening from Mrs Kitlar and a crisp morning.  Then off to start the beginning of our Canberra journey.  The War Memorial was exciting, interesting and very cool.  It really gave you an idea of what war was like.  We then travelled to the Mint and the Old Parliament House.  We are now home but very tired, looking forward to tomorrows’ events.
Josie.

We started the day at Government House, the home of the Governor General. My favourite place to visit today was the Australian Mint.  We also went to the War Memorial.  It was a 10/10 for everything.  It is perfect for all ages.  We went to the Hall of Valour and we had to pick a story. I chose to read about Private  Robert  Cuthbert  Grieve.
The Memorial took me on a journey where no book or movie could have.  I’ve learnt many things that will stay as highlights of my childhood. 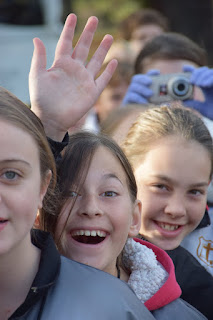 Today we woke up and we had our showers and went to breakfast.  Then we headed off to the Governor General’s home where we got a tour of the house.  It was huge.  A pleasant experience and we went on the bus.
Joshua Sanders. 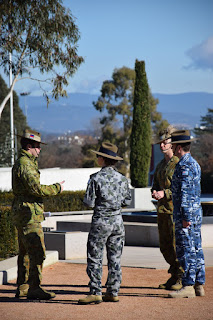 One of the many places we went today was the Australian War Memorial.  We got to see and touch real things they used in the war, like helicopters, planes, trenches and more.  We also got to walk around the museum.  At the end of the day we went to bed, ready for a big day tomorrow.

Hey Mum, Dad, Tristan and Heather.  I am just letting you guys know that I’m all good and safe and that the flight was great because there were some awesome movies.
I love you, Ethan.

At 11.00am today we arrived at the War Memorial.  We had a look mainly at the wars that Australia was involved in.  The first thing we had a good look at was the Discovery Zone.  Everybody got to touch and look at things.  This included things like life in the trenches, life while the war was on, living in the submarines, helicopters and more.  After discovery zone, we all went to the light show and watched an amazing show about the men in the helicopters during the war.  It was crazy!  When the light show finished, sadly we split up into groups and did a self-guided tour.  We all had an amazing time.
Brianna.

On the 25th of June, Year 6, the Year 7 and Carnarvon students arrived at the Royal Australian Mint to be greeted by Jo to give us a tour around.  First we were given time to browse around the gift shop.  After that, we headed upstairs to the educational room where we watched a video on how to make real gold coins.  After that, we left the educational room and saw a big wall about history of Australian coins.  Then we went on a bridge where you could see the people and robots at work.  We saw two robots called Titan and Robbie in the factory and Titan was showing off.  After that, we headed downstairs and back to the bus.  It was really fun at the Mint.
Irwin.

At 3.45 we arrived at the Electoral Education Office our tour guide name was Sarah.  She taught us how to vote.  We watched a movie about the history of voting.  Then we played games to do with voting.  We did a preferential vote on fruits, which were orange, apple, peach and banana.  Apple won in the end.  We had a lot of fun. Today was great!
Hi Mum and Dad, I’m having so much fun, love you.

The Verse Of The Day